The Wyrd of Stromgard: Viking Expansion for Dungeon World

It has been a long time in coming but my biggest project to date is up on Kickstarter.

The Wyrd of Stromgard is a Norse/Viking themed expansion for the TTRPG Dungeon World and it provides a total smorgasbord of intricately themed playbooks, setting, monsters, lore, and even a campaign front to get you and your homies in the conquesting spirit.

The Wyrd of Stromgard strikes a really fun balance between a flexible spectrum of high and low fantasy (depending on individual table taste) and historical realism.  While being absolutely historically accurate in a Norse setting isn’t possible (there’s simply too much that’s been lost or reinterpreted over time) the realism in the high value of iron tools, resource scarcity, and harsh environmental factors really gives Stromgard a sense of dynamism and a life of its own. 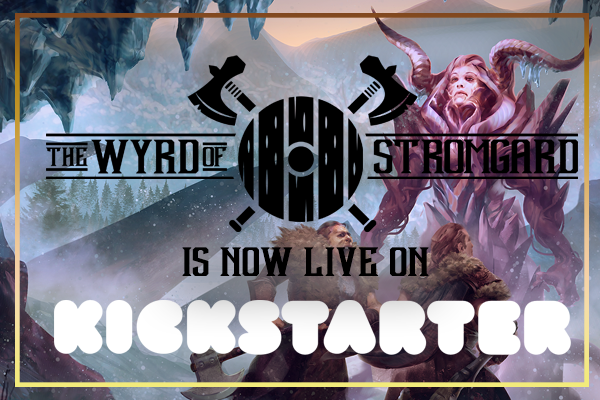 Stromgard’s character playbooks take a ton of inspiration from the surviving literary sources of Norse lore.  The Bearskins were mentions in the Poetic Edda, the Jotunnborn was inspired by Beowulf’s Grendel, the Seidr was taken straight from the Voluspo. Players will really feel as though they’re living legends, doing great things and forging their own paths of mythical heroism- whether for order or chaos.

The Wyrd of Stromgard also comes with a huge campaign front to get you going… though it really isn’t for the faint of heart.  Over four separate dangers, the campaign ramps up in scope and difficulty, starting out with a cult of rogue elementalists before things get crazy and Ragnarok is started- meaning your party will be up against Fenrir, Jormungand, and Surt.  The last act takes place directly in the middle of the last stand of Asgard against the fire giants. These threats are too powerful to just beat down with brute force so you’ll have to get clever if you think you’re going to smite these interplanar menaces.

The Wyrd of Stromgard isn’t completed yet- its going through crowdfunding at the moment- but the journey so far has been incredibly gratifying and I hope that the many rpg fans that are as enamored with Norse mythical/occult aesthetics as I am find Stromgard an ideal setting to tell their own legendary stories.

Get Modern Fairway 4: Spec Ops in the Rough